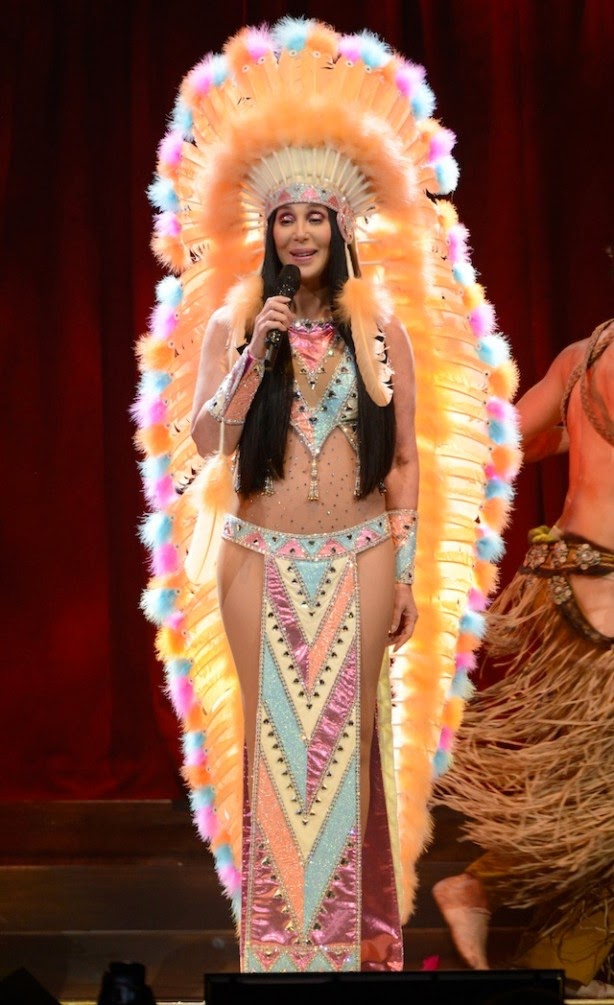 Last night we were lucky enough to be two of the people at Cher's sold out Dress to Kill Tour stop in Dallas.  It was the most extravagant, most fabulous, most fun concert I've seen to-date.  I really want to see the show again and again.  (I think we should make it illegal for Cher to ever stop touring.)

Cher's voice is amazing.  She sang every song live. Hearing her power voice live was incredible. Dallas was the third stop of the tour and they are still working out a few of the rough spots.  She spoke to the crowd from backstage before the show started saying they were having some audio issues and she apologized for being late- she assured us she wasn't still putting on her make-up.  In a world where everything is highly polished and highly produced I loved the fact that during one of her dance routines she accidentally sat on one of her dancers (she missed her mark) and Cher yelled "Oh, I'm old!"as she rearranged, and she stopped singing for a few verses while she worked out her church-giggles.  It was real. It was fabulous.

Joey Guerra of the Houston Chronicle wrote the best synopsis of the show when she was in Houston on Monday night.  You must read it.

My husband was able to capture a video of  Cher's finale where she flew above the arena as she sang "I Hope You Find It" It was divine. Cher flew over my head!  I'm so happy! Go see this show.