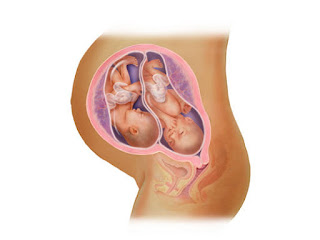 To increase the chances of getting pregnant we performed preimplantation genetic diagnosis on our 5 day old embryos.  The main goal of this test is to identify any abnormal embryos, which would not be implanted into our surrogate.  If we implanted abnormal embryos, then nature would most likely not allow us to stay pregnant.   We wanted to get pregnant and stay pregnant; as such, we implanted two genetically normal embryos.   Another data point that arrives with the DNA testing is the gender of the embryos; we were able to select the gender of the embryos we implanted.

Through this whole process, my strong opinion has been I didn't care if we implanted boys or girls I just wanted us to implant the same gender.  As you know, we implanted two boys in July.

I was in shock.  I kept asking the tech to recheck.  I kept saying things like, could it (the boy part) be there and you not be able to see it?  I couldn't believe it.  For 20 weeks I've been the father of two baby boys. When the doctor arrived he zoomed in on a certain part and said: this is not a boy.  Oh.

The very same day we went to the OB-Gyn doctor appointment and we asked the second doctor to perform another sonogram.  She did and she said, again, this is a boy and this is a girl.  Oh.

If god exist, then maybe she's reminding us we're not in control?  I called my husband to inform him of the news, and he laughed with loads of joy.  I enjoyed hearing his excitement.  I was still in shock.  I wanted to find a third doctor to check.

Phone calls were made to our fertility doctor and he reminded us that the sex gene is the faintest gene on the test.  The determined gender is only 98% accurate.  Cells from the actual embryo are not biopsied, it's cells from the sack (whatever the embryo hatches from) and since we're not testing embryo cells the gender can be misdiagnosed.  This means our girl is in the top 2%.  She's going to rule the world - as all girls should.

On the drive home I felt guilty for feeling a sense of loss.  We had two boy names picked out.  I had already envisioned our family of two dads, two sons, two French bulldogs and one spectacular hound.  My plan was to have two sons, and then go back in a few years and get two daughters.  I had a plan.  This was not in my plan.  I avoid surprises in life.  I plan.

My husband said it best: We (he really meant me) have to learn to release our agendas.

My brother's wife, the mother of our nieces, helps me process my emotions related to fatherhood, said that as a parent I will never be in control, and this is just preparing us for that fact.

Last night at dinner my maternal aunt, and mother of three, said something similar: you don't have control as a parent.

So I needed 36 hours to pivot my thinking.  If someday in the future my baby girl reads this silliness, then I want her to know it's a joyous blessing.  I'm just needed a moment to reset my plan, and I'm insecure about my ability to raise a successful girl, since women can be very mysterious to me still.  I've got time to figure it out.  To plan.

I'm going to have a son and a daughter!  How lucky is that?  And the adventure continues! 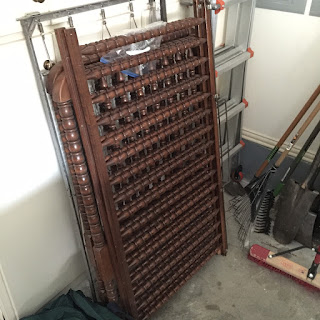 This past weekend I was in a home with a framed tablecloth hanging on the wall as a large scale art installation in the dinning room.   The tablecloth was hand made in the 1700's by the homeowners humptenth great grandmother and passed down through the family since that time.  It was a special piece.  I enjoyed seeing the names and birth dates of the women who had cared for the item during their lifetime and then passed it along afterwards.

Seeing this epic heirloom made me think about my baby bed, which is currently sitting in my garage waiting to go back to my parents' storage building where it has rested for decades.  While my mother was pregnant with my brother her grandfather purchased the baby bed for my mother to use on his first greatgrandson.  My mother's grandfather died a few months before my brother was born.  But the baby bed is where my brother slept, I slept, and then I think it was loaned to our cousins for a few years too.

I intended to use the baby bed for my children, which is how it ended up in my house.  However, upon closer analysis - it was designed with the latest technology from 1978: a drop side crib -  I think we're going to pass on using the crib for our children.  Yes, I know my parents successfully reared two sons to adulthood and started them off in this baby bed, but my husband called it an antique death trap. 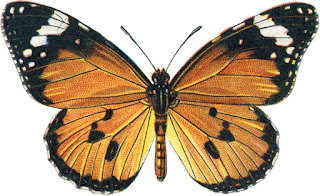 It's eleven days into November and while I was playing with the dogs in the backyard we were swarmed by mosquitoes.  I couldn't believe it.  This made me angry.  Again, it's November.  I put the dogs up and sprayed the yard with mosquito killer.  All summer I had been spraying mosquito replant, but I was done with that stuff - it didn't really work very long - I was spraying the real deal killing stuff.  The whole time I was spraying I was so mad at the fact that I was still battling mosquitoes in November.

In my anger I failed to realize I would kill mosquitoes and any other insect in my backyard.  I was totally focused on exterminating mosquitoes.  As a result, unknowingly I sprayed two resting monarchs.  They were sleeping in my hedges and I hosed them down with my mosquito killing spray.
I killed the monarchs, who were undoubtedly migrating south for the winter.

I felt bad for killing the monarch butterflies.  It's hard to celebrate the death of mosquitoes now.
Posted by P.A. at 2:35 PM 1 comment:

I Just Finished a Marathon 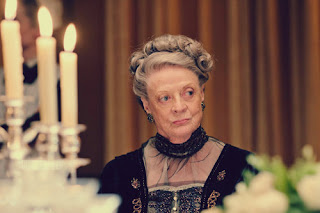 I finished a (Downton Abbey season two) marathon while traveling recently.  I have a new goal in life.  I want to be Dowager Countess of Grantham.  That is all.
Posted by P.A. at 2:12 PM No comments: 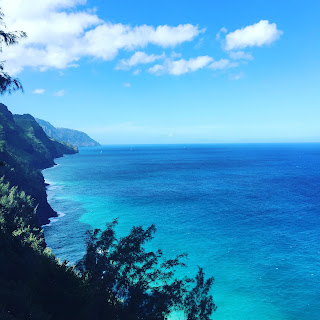 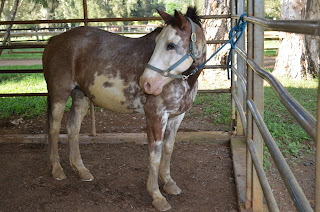 I'm certain as fatherhood is newly upon us there will be many new terms entering my world.  One word that's new to me in 2015 is Babymoon.  At first I thought the term was for couples who are going on trip to try to get pregnant, which wasn't relevant for us.  I was mistaken.  A babymoon is a romantic vacation taken by parents-to-be before their baby is born...or in our case before our babies are born!  We weren't thinking about a babymoon when we booked our trip, but we embraced the babymoon spirit while we were on our trip.

First,  the hotel discovered we were having twins and had champagne and cake and a "happy babymoon" note waiting for us in our room.

Second, while in the towns we were asked on three different (unrelated) situations if we were brothers.  I know the strangers asking the question are simply trying to connect with us and they mean no harm, but asking if we're brothers pisses me off enormously.  I usually snapped back by alerting the stranger that we're married.  I tried to handle the situation with empathy, but a hetero couple would never get that question, which is why it makes me cranky.  Can you imagine my brother and his wife entering a gallery and the owner asking if they are brother and sister?  I cannot.

One gallery owner felt bad after asking the question, she offered us a 20% discount on her art.  Of course, 20% off art doesn't do much to move the needle on the price closer to affordability.  Still, I accepted the offer as a token of goodwill and thanked her.

Third, one morning while we were walking on the beach we ran into a mother of two-year-old identical twin boys.  We informed her we are pregnant with twins too!  I asked her if she had any advice.  The one comment she stated is that the first year is terrible, but it also becomes a blur so you don't really remember it.  The mother told us how much more fun she's having now that her boys are two.   This advice is similar to my friend (and mother of a singleton and twins) Jenna gave us...the key with twins is to survive the first two years.  Jenna informed us that twins have a built in playmate - so they entertain themselves.  It makes it easier after the first two years.

Finally, after the desk agent checking us into our island hopping flight found out we were married, she asked if we were on our honeymoon; we informed her we're on our babymoon!  She got super excited and she hugged my husband and high-fived me.  She encouraged us to move to the island to raise our sons.  It was beautiful. 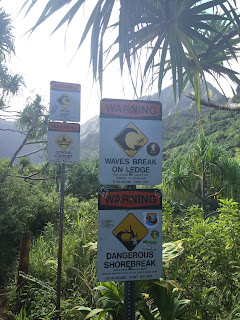 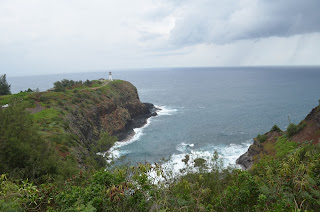 My husband and I just returned from a week on the island of Kauai, and if you wish to experience Hawaii at its very best, then you need to travel to Kauai.  It felt very authentic.  The island hasn't been sanitized for tourist.  It hasn't been crafted to fit a Disney or a Hollywood version of Hawaii, it's not full of polished resorts.  It's full of beautiful lush landscapes inhabited by lovely individuals.  It's real.  It's beautiful.  I'm ready to return. 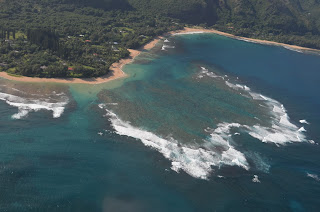