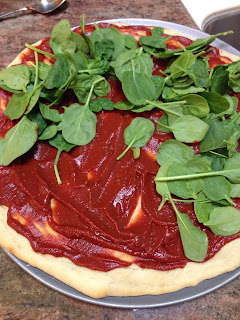 My husband is a champion pizza maker - he bakes his own dough and makes his own red sauce! He could win awards with his pizza makin' skills.  This weekend he decided to add spinach to the pizza.   My husband is also a genius.  We could all use a little more spinach in our body, right?  Look at his two cheese spinach, roasted tomatoes, and seared pepper pizza! 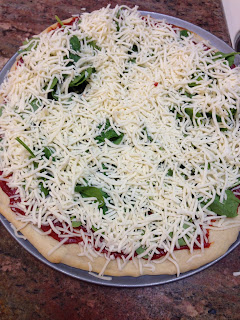 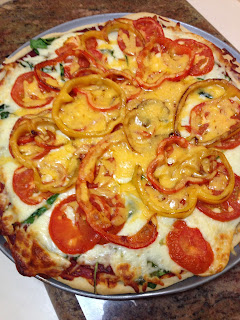 You didn't really taste the flavor of spinach - it was present, it added a little something to the slice, and it was nutritious! 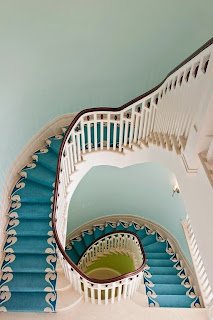 I'm gay.  My husband is gay.  Gay rights are personal to us.  I'm not excited that we're headed into another Presidential election cycle, because here we go again, descending into stupidity:

"I think traditional marriage is a sacrament. To imagine how we are going to succeed in our country unless we have committed family life, committed child-centered family system is hard to imagine. So, irrespective of the Supreme Court ruling because they are going to decide whatever they decide, I don’t know what they are going to do, we need to be stalwart supporters of traditional marriage. Thousands of years of culture and history are being changed at warp speed. It’s hard to fathom why it is this way." - Jeb Bush, speaking May 18 to Christian broadcaster CBN. (Via Joe My God)

At least (according to this Politico article) the GOP core is dying off and they are attracting fewer first time voters. 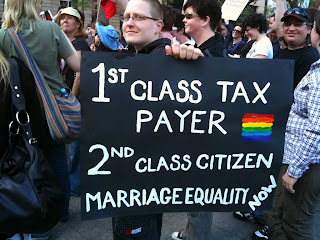 Thank you to the citizens of Ireland for approving a referendum to explicitly state in the country's constitution that marriage is recognized irrespective of the sex of the partners.  (Read the Wiki page here.)

Before the vote in the Republic of Ireland, I didn't think it was possible for a the rights of a minority (homos) to be approved by the majority (heteros); it's difficult for a minority to win a majority of any election without supporters.  This gives me much hope for the future of gay people all over the world.

I celebrate the people of Ireland!  This BuzzFeed article makes me so joyful, here.
Posted by P.A. at 9:14 PM No comments: 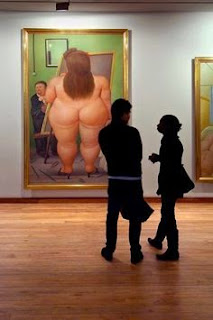 This weekend while I was getting ready to step into the shower I caught a glimpse of myself from the backside.  I stopped to check myself out from the point of view I rarely see.  I moved a mirror to take it all in.  I have an enormous bald spot, love handles flank my midsection, and I have a jiggly bottom.  I felt like a male muse for a Fernando Botero painting.  It was a funny moment.

However, when my husband looks at me I don't feel like a large, exaggerated volume being.  I feel like I belong in a Magic Mike movie: 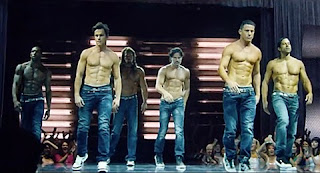 This week we will be celebrating 9 years since our wedding.  I still feel like the luckiest man in the world to be married to my husband.  He makes me a better person and he makes me feel like I'm the greatest individual in the world.  I hope I make him feel the same way, because he really is the greatest individual ever to have lived on earth! (Even if his eyesight must be fading!)
Posted by P.A. at 7:32 AM 4 comments: 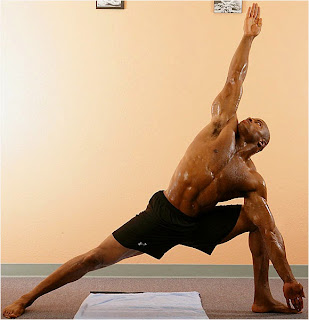 Triangle Pose is the pinnacle of the standing series in Bikram, and it's a bitch of a pose because it requires all your strength and focus.  Our studio has a tradition of singing happy birthday on the second set of triangle if it's your birthday and you're in the room.  It makes the pose go faster too, since the highly intelligent class full of yogis can rush through the song.  (Go team!)

Today one of our favorite teachers, Julie, was teaching and before we went into the set up for the second set of triangle she asked if anyone in the room had a birthday.  No one did.  My husband spoke up: "Patrick's brother's birthday is tomorrow.  We should sing to him."

Julie accepted this as valid; she asked for his name and then 36 yogis rushed through happy birthday to my brother Stephen - someone they've never met.  It was awesome.  It made me laugh and smile.  After the set I heard someone say, "Thank God for Stephen!"

And thank God for my husband!  (The man that knows how to work the system.)
Posted by P.A. at 6:40 PM No comments: 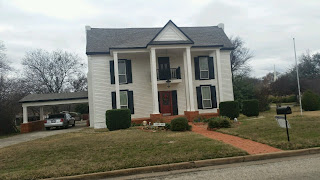 Look at that fresh coat of paint on this old house!

It's ridiculous to get emotionally attached to real property.  (Sometimes I embrace the ridiculousness.)  The house pictured hasn't been in our family since 1982 after my great grandmother's death.  It was the house built by my ancestors, passed down through inheritance, and finally ending up as the home of my great grandparents whom I never really knew. 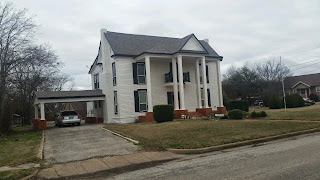 It was the home where in 1975 my 19 year old mother married my father!

In the 1990's one of my best friend's mother bought the house, and I spent many days in the large old rooms.  (The first time my mother visited the house in 1990's I can remember her crying by being flooded with her childhood memories; it's hard not to get attached.) The house had recently fallen into disarray - it's time for someone to invest in rebooting the house; however, the house is somewhat functionally obsolete...it only has two bathrooms for the five bedroom house and the closest are small, which is normal for an almost 100 year old homes.   This house needs a major overhaul to bring it into the modern world.

I think this house is the reason I wanted to own a two story house.  Our family stories retold frequently were always so grand and idyllic when it came to Thanksgivings, Christmases, weddings,  and funerals that happened at this house.  For at least a couple of generations the matriarch of our family occupied this house, which is why the stories were always happy.

What matters most in life are the relationships we have with the people we love.   In the end a family is a group of people united by familiar experiences and a familiar narrative.  The stories we tell even out live us.  When I'm an old, old man (and assuming this house survives) I will point it out to my grandchildren: "This is the house were my parents were married!" 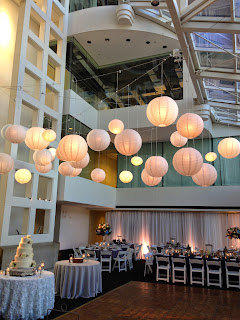 This past Saturday night we celebrated the marriage of Lance and Lauren at their big fancy wedding; the reception was held in Dallas on the 40th floor at Petroleum Club's sky lobby overlooking the fast moving city below.  I grew up with Lance; we held the same summer jobs in high school together and we were roommates in college too.   At the wedding Lance surrounded himself with friends we've known our whole life, and what's spectacular about life long friends is that you always seem to pick up where you left off no matter the time gap from your last conversation.   It was a fun party for everyone, and Lance and Lauren looked so happy together.

One of many things I appreciate about Lance is his ability to talk and network with anyone.  I am shy by nature, I don't make friends with strangers, but Lance can dive into any situation and make friends immediately.  As a result his wedding was full of fun people.

As we embark on fatherhood, I have come to really appreciate my small town upbringing.   I graduated high school with 121 friends, and maybe 100 of those friends went to first grade together.  It's created deep bonds among those individuals, and those bonds are always nice to revisit.

With our careers I don't know if it's realistic for us to pack up and move to a small town for the next 18 years to raise our children.  However, I can clearly see the value/benefits of the small town childhood.  I guess what I'm saying is: Thanks Mom and Dad.
Posted by P.A. at 7:37 AM 2 comments: 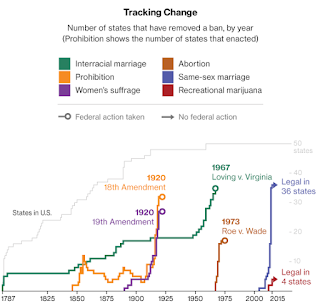 Last week the Supreme Court of the United States of America listened to arguments about the constitutionality of my marriage.  Yes, it's a deeply personal issue to me.  Last week I only read the flurry of headlines and articles with my personal point of view front and center - I'm a gay man legally married (thank you California) to my forever man!

The SCOTUS ruling expected in late June will directly impact my life.  This is real.

I did enjoy reading articles about Notorious RBG!

I also enjoyed seeing this interactive chart about the speed at which Americans' opinions have changed on social issues.  Here.

Now we have to wait until June to learn their decisions about my marriage.
Posted by P.A. at 7:19 AM No comments: