Finally: 52% back law to legalize gay marriage in all 50 states 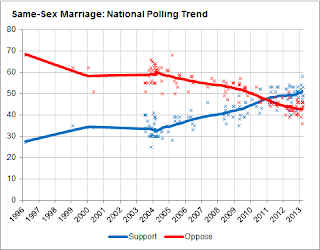 The summary results from a new Gallup poll: "If given the opportunity to vote on a law legalizing gay marriage in all 50 states, the slight majority of Americans, 52%, say they would cast their vote in favor, while 43% would vote against it."

This data proves what is evident in my world.  Being gay is rapidly becoming less taboo; the momentum is headed towards equality and away from hatefulness.  As more gay people step out into the spotlight, then it's easy for heteros to see that homos are people too.  It's easy to fear what you do not understand, but once you hang out with gay people, then you understand there is nothing to fear.

The point of this blog has always been to demystify homos.  Like you, we're living life in all its gloriousness.