Sick As a Dog 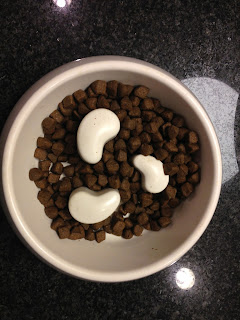 Our ten year old Dachshund/Boxer son, Trigger, like a supermodel, has been hungry his entire life.  For ten years he's looked up at me after his speedily eaten supper with a searching nose thinking quiet clearly: "where's the rest of the goddamn meal?"  (I don't like it when Trigger cusses, but he's hungry- so I cut him slack.)

On Monday, for the first time in his decade of living, Trigger was uninterested in food.  He didn't eat. Our household was shocked.  I ensured he was still drinking water, and then I decided to give him another day.  After all, we had an incredibly chaotic weekend with reunion-ing on Saturday and lake-ing on Sunday.  He might be exhausted.

On Tuesday, for the second time in his decade of living, Trigger was uninterested in food.  He didn't eat.  Our household went into ludicrous speed panic mode.  I force fed Trigger crackers and peanut butter.  (He cannot starve to death!  Not on my watch.) My husband flew back early. A midnight emergency vet appointment was scheduled.  We FaceTimed with my husband's surgeon father and doctor-mom mother.  After much poking of belly and rubbing of teeth, collectively we decided Trigger was in no immediate danger.  He was just ill.  The midnight emergency vet appointment was canceled.
This morning my husband took our son to the vet.  The findings: Trigger has some serious tummy issues, but it's nothing that a handful of daily pills cannot cure.  We're all relieved he's going to recover his health...and his appetite.
Posted by P.A. at 10:24 PM