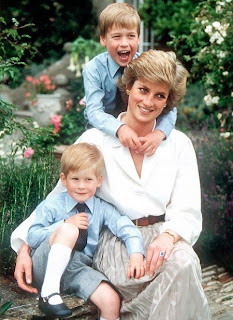 ...does anyone else think it's odd that while we were cruising on our American Airlines flight back to Dallas, which had WiFi capabilities, the flight attendant decided to announce the birth of William and Kate's baby boy to the whole plane?

All children are special gifts and while I wish William and Kate the very best, I don't understand the uproar in the U.S.A. over the birth of a foreign country's future king.

Is it just me?

I found this picture on the Internet- how beautiful was Diana?  She's lovely.  She also seemed to have been a good mother based on the men her boys have become, and perhaps that's the most important achievement of an individual's life- to raise honorable, happy children.  I hope to try to achieve that goal "some day."

Can we make a new rule?  All children need to be uproariously celebrated.  Is it possible for American Airlines to announce the births of all children mid-flight?!

Hooray for all babies...including future kings!
Posted by P.A. at 10:01 PM