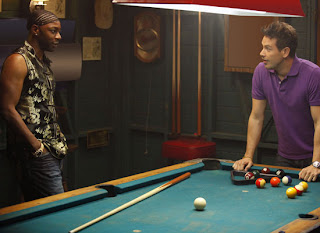 Last night we had dinner with two of my husband's colleagues. They were in Dallas from out of town for a conference or class or something. One of the guys is a 39-year-old married father of three daughters and the other guy is a 52-year-old married father of two sons. At dinner last night the four of us spent at least 10 minutes talking about HBO's True Blood, because we are all addicted to the show!

We debated if Franklin is really dead.

We tried to figure out what's up with Jesus sudden appearance, and we wondered if Lafayette has powers too?

To me this is significant, because these two heteros watch True Blood, and really enjoy True Blood, and True Blood has homos as important characters in the show. True Blood might be one of the only popular shows that includes homos kissing and gay sex. Of course True Blood also has straight sex, vampire sex, and human/vampire sex, but still my point is that the world is changing. Can you imagine if True Blood would have been on HBO ten, fifteen, or twenty years ago? I dream of a world where being homo is no-big-deal, and I think we're getting there...
Posted by P.A. at 8:47 PM