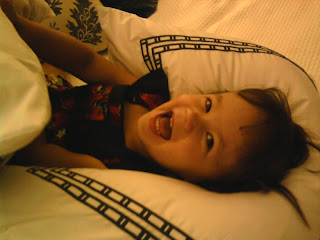 My brother and his wife are always competing. They like to ask Presley if she's a mommy's girl or a daddy's girl in front of each other to see what she says. Today my brother called to report the following conversation between him, his wife, and Presley:

It's impossible for my brother's wife to win this game right now. Since my brother's wife is responsible for feeding Paxten she does not have as much time to spend interacting with Presley. My brother and Presley have become BFF's ever since Paxten has entered the world. Sometimes I wonder if I'll be as good of a father as my brother has become to his two daughters; I don't know if I'll be able to compete with him.
Posted by P.A. at 4:57 PM