The drink was saved! (And so was his life.) 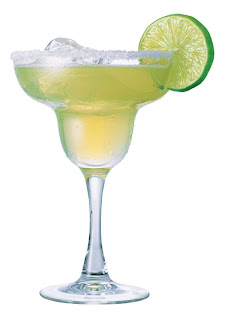 Saturday afternoon we had a small family reunion at our cousin Sarah and her husband George's house on Lake Lewisville. The house sits high above the lake, and their back yard includes a network of different concrete levels that gradually descend to the water. Protruding from the highest level is an old wooden deck built (incorrectly) by the previous owners of the house. My husband, who loves lakes, walked out on the wooden deck with his frozen drink in hand to get the best view of the lake. As his left foot stepped onto the deck the board supporting his foot completely broke and fell the 15 to 20 feet below. His left leg was instantaneously swallowed up by the hole in the deck all the way up to his thigh; while his left leg was disappearing in this hole his right leg kicked out onto the unbroken deck. His right arm flung out on other parts of the deck to add additional support while his left hand held onto his frozen drink, which was not spilled.

Since we did not want any more weight on the deck my husband slowly emerged from his predicament all by his lonesome- with his drink in hand!

Hypothetically speaking falling through a deck high above a lake could have been a catastrophic event. However, since my husband has a yoga fit body (he's really flexible and really strong) and since only one of the boards broke- he walked away with a few scrapes and bruises. Instead of thinking about a hypothetical tragedy we are thankful that this happened to someone as athletic as my husband that could handle the situation. We also like to laugh at the fact that even though his life might have been in jeopardy (hypothetically) he still did not spill his frozen drinky drink.