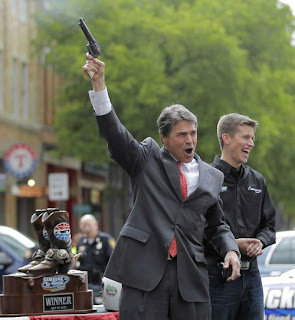 "There is still a land of opportunity, friends — it's called Texas," Perry said. "We're creating more jobs than any other state in the nation. ... Would you rather live in a state like this, or in a state where a man can marry a man?"

My husband and I are 100% Texan, and YES we do want to live in a state where a man can marry a man - it's called Texas. When will Republican politicians stop using gay marriage as a wedge issue? It's nothing more than pandering to the lowest common denominator. It's ignorant, but unfortunately it seems to work...
Posted by P.A. at 6:58 PM