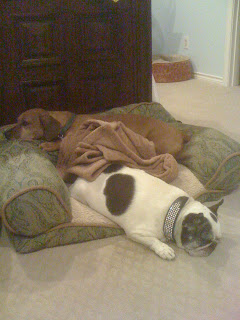 This rarely happens, but when it does it makes me smile with pride; sometimes our two beloved dogs end up sleeping in the same bed together. Martha Fauker is older and bossier, and she relates more to humans than to dogs, which means she really doesn't ever play with Trigger. In fact, sometimes I'm unsure if she ever acknowledges Trigger's existence. If he tries to give her a lick on the face, she moves her face. I don't have much proof that Martha Fauker interacts with Trigger unless he's doing something she doesn't tolerate...at which point she charges Trigger, which frightens him into submission.

However, there are moments when for whatever reason they appear to love each other. It makes me happy to see them together. I guess that's just a classic sibling rivalry?
Posted by P.A. at 10:17 PM