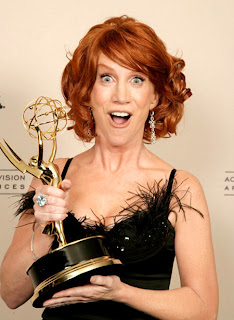 Heteros that champion gay rights are considered our allies. An "ally" is a person who is a member of the majority group who works to end oppression in his or her private and professional life through support of, and as an advocate for the oppressed population.

Currently our most vocal ally is comedian Kathy Griffin. She just finished her sixth season of her Bravo reality show, and she dedicated an entire episode to highlight her trip to Washington D.C. where she encouraged law makers to repeal "Don't Ask Don't Tell" in the armed services.

Peppered through her funny and shocking television moments she made some really good and serious points:

I think this is why Kathy is a double Emmy winner. She uses her humor to address serious subjects, and she entertains while she encourages change in the world.

And the closeted gay service member that is still currently serving in the army said it best: We have hope because of people like Kathy.
Posted by P.A. at 10:39 AM