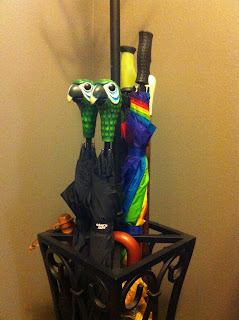 I first saw Disney's Mary Poppins the musical in 2009 to celebrate the birth of my husband's mother.  This week  Jim's wife was out of town on business, which means Jim had an extra season ticket to the show.  I snuck out of work "early" and Jim, Steve, Jeff, and I went to see Mary Poppins.  I don't think Jim was really in to the show, but he was a good sport.  And, of course I purchased another parrot head umbrella...which Jim and Steve and Jeff thought was hilarious...maybe even a little strange...

Clearly they didn't spend childhood hours trying to create a parrot head umbrella.  I did.  My childhood goal of owning a parrot headed umbrella is now realized, twice over!