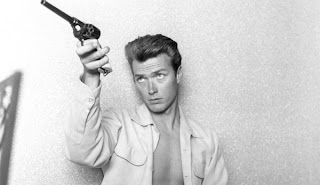 "Hollywood icon Clint Eastwood has joined a large group of Republicans arguing for same-sex marriage in the US Supreme Court. Prominent conservatives and many of the largest US corporations now favor gay marriage as well."  (Christian Science Monitor)

One day it'll all seem a bit silly that we had to fight for equal rights. One day soon, I hope.

Republicans used the politics of fear to turn marriage equality into a wedge issue in so many previous elections.

Today it looks like many Republicans including Clint Eastwood are for the first time publicly pro-gay, pro-equality, pro-marriage for all!  It's moments like this that keep me energized with hope that my state and my nation will "one day" recognizing my marriage.

And just like Andy told Red in The Shawshank Redemption: "Remember, Red. Hope is a good thing, maybe the best of things, and no good thing ever dies."
Posted by P.A. at 6:00 AM