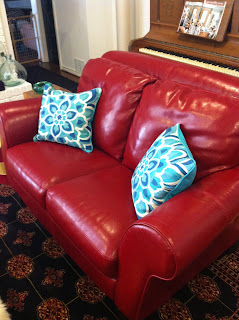 Our friend Del stayed with us for almost a month while he was working in Dallas, and it was a joyous set of weeks.  He just joined our household while he was here.  He took care of the dogs when we were out of town.  He went grocery shopping when the pantry was low.  He even picked up the check at dinner numerous times.  He is the most enjoyable house guest ever!

While he was here he overheard me inform my husband that I needed a second pillow for our red leather love seat.  My husband shot me down, because he doesn't like me to spend money on stuff for the house.  He thinks the stuff for the house is want not a need.   Del tracked down Wisteria in Dallas, purchased the pillow, and gave it to me as a "because you should have it" gift.   I thought it was tremendously thoughtful.  Doesn't it look nice on the couch?

Del is also on to me.  He said I have this "thing" where I have at least two of everything I love, which is why he knew I needed a second pillow.  He started going around the house pointing out all my multiples: from scissors, to sharpies, to pillows, to chairs, to home accessories...if I like something, then I usually own at least two of them.  I'm slightly ashamed to say it's true.  I've known this about my personality for years, my parents used to call me a "pack rat," but I usually try to hide it from the world (mainly my husband).

Del's daughter came to visit this weekend and he acted out this bit in front of me and his daughter where he pulled out all my scissors and said: "You don't need all them scissors.  When will you need twelve scissors?  What will you be cutting?"  It's a funny bit.  He did it again with my stash of sharpies and pens.  We were all laughing.