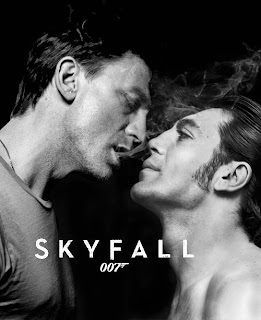 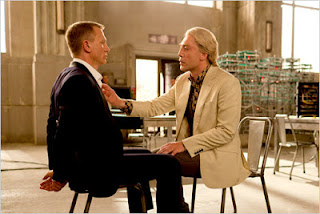 I realize I'm a little late to this party, but we rarely go to the movie theater any more, which means I just now saw the most recent James Bond film Skyfall.  It might be my favorite of the franchise.  I was giggling like a gay man after watching the brief homoerotic moment of the film.  The Bond villain (Javier Bardem) has (the always womanizing) Bond (Daniel Craig) tied up and starts to fondle 007's sexy chest.  When the villain suggests this is the first time Bond has been handled in such a way by another man, Bond replies: ‘What makes you think this is my first time?’

This is where I giggled.  Oh Bond you're always such a flirt.  Well played.

I love this moment in the film.  How do you terrify a straight man?  Tie them up, caress their chest, and imply that they are about to get man-handled!  And since Bond has objectified women his entire career it was a nice balance of karma for him to be objectified by another man.  (Turnabout's fair play.)

Yes, the times are changing when a homoerotic moment appears (for a brief moment) in a James Bond film!  It's a good sign for the gay people of the world, right?
Posted by P.A. at 6:00 AM