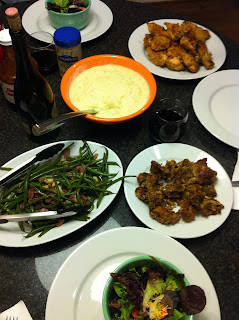 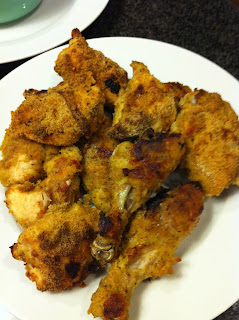 Hooray!  Our beloved friend Del is spending the month with us while he's working in Dallas.  He officiated our wedding in 2006; he's more than a friend he's family.  We really enjoy having him under our roof.  While we were at yoga he was cooking supper.  He found my cast iron skillets and was cooking like only a Southern man can.  He cooked his fake fried chicken (think Shake N Bake but with more dynamic flavors), fake fried chicken livers, garlic and bacon green beans, whipped potatoes, and a mixed green salad.

It was deliciousness!  Maybe he can stay for a few months?
Posted by P.A. at 6:00 AM