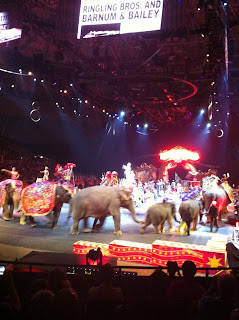 We had a fun family outing at the circus this weekend.  My brother's family, my parents, my uncle and the two of us attended the show.  Paxten, who's 1.5 years old, wasn't really into it, but she liked the popcorn and her sister's snow cone.  Presley, who's 3.5 years old, loved the show.  As soon as it was over she wanted to watch it again.  The circus is a really big show.  There were at least 100 people in the show, and parts of it reminded me of Cirque du Soleil.  My favorite part was watching the 7 motorcycles in the metal sphere.  The circus is also a money grab; they had stuff you could buy everywhere.

I spoke with the PETA protesters before we went into the show; they said the elephants are abused.  However, after watching the show it's the tigers that looked mistreated.  They appeared to be scared cats.  I'm always conflicted when I see working animals, I never know if it's good or bad.  These elephants might not be free, but they aren't going to be killed by poachers.
Posted by P.A. at 6:29 AM