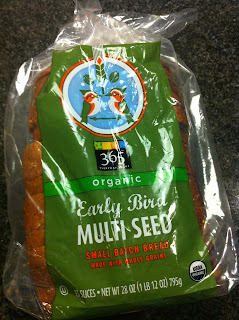 Once, in passing, while at work I mentioned that my husband and I shop at both Central Market and Whole Foods.   I was trying to end a "Central Market vs. Whole Foods" conversation, by simply pointing out that they both are valuable.  However, I misfired into that conversation because the takeaway that everyone remembers all these months later is that I'm a grocery store snob.  If "grocery store snob" means I care about the source and quality of my food, then yes I'll claim that perception as my truth!

However, I was challenged during the original conversation.  No one could believe that after shopping at Central Market I'd drive another mile to shop at Whole Foods.  I was surprised at everyone's surprise; it's not like Central Market and Whole Foods are homogeneous products.  At least not to me.  The person supporting Central Market in the "Central Market vs. Whole Foods" battle asked me to name one item that I couldn't get at Central Market.  ("Just name ONE!") I immediately fired back with what I call "bird seed bread" but is really called (see photo above) Early Bird Multi Seed bread.  The group couldn't stop laughing at "bird seed bread."  At work for months after that conversation, all in good fun, if someone was being demanding/high maintenance/fussy, then a person on my team would say; "I bet they like bird seed bread too."  If that line was dropped correctly, it always made us laugh out loud.

As a gift for having us over to dinner I gave one of my colleagues a loaf of bird seed bread, and two days later I received this text: "Thanks for getting me addicted to bread that costs $4.50 for 15 slices."  Apparently he had purchases his own loaf!  I made him proclaim his addiction to bird seed bread the next day at work.