Lucy, We Love You Still 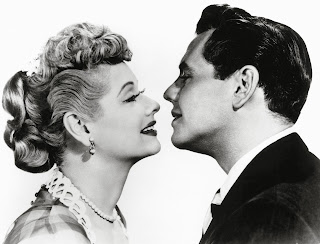 I've enjoyed my lazy Saturday morning.   I'm solo again this weekend- my husband is away at school. It's a bit chilly outside, but it's warm in the house.  I'm drinking coffee.  I made some divine oatmeal.  Life is good.  While I was being lazy I began to clean up the DVR, and I watched the I Love Lucy Christmas Special I recorded before Christmas.  It was nice to see the old friend on the television again.  In middle school I watched I Love Lucy every night.

I was curious how well the show did for CBS some six decades after if first aired; I was surprised that 8.7 million people tuned in to watch.  Think about that for one moment; the original television run of that show was 1951 to 1957, and in December of 2013 over 8 million people are tuning in.  It's spectacular that Lucille Ball has stood the test of time with I Love Lucy, and she was 40 years old when the show first aired.

It's interesting that even though Lucille Ball was in her last decade of life when I arrived on earth, of course we never met, and she was gone before I started really watching the show I still think of her as a friend.  Is that strange?  I would have liked to hung out with Lucy of the 1950's.  I think that's the appeal of the show.  She's so likable.
Posted by P.A. at 10:19 AM