As it Should Be 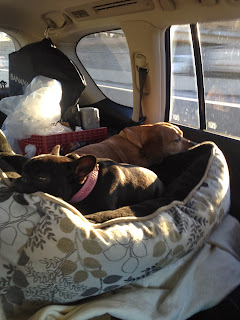 Road trip!  We loaded up the dogs and dropped them off at my husband's parents house on our way to a fast trip down and back to Austin.  We were celebrating the wedding of my husband's college/post college roommate.  She is Indian-American and her husband is Polish-American, and the wedding was the most delightful combination of the two cultures.  The groom's mother (along with all the other women in the wedding party) wore a sari.  The bride, as a tribute to her mother, wore her mother's wedding sari down the aisle, and then the bride changed into a heavily beaded sari for the reception.  I really enjoyed the bright colors and beautiful flowers at the wedding and reception.  The wedding buffet included both Indian and American and Mexican dishes.

We are living in a new age.  Just as my husband and I, two men, got married, an Indian-American who's Muslim can marry a Polish-American who's Christian.  It was a joyous event.

I'm a big fan of adding food trucks to wedding events- it's starting to be a new trend.  This bride had a small wedding cake, and then at around 10:00 PM a cupcake food truck arrived outside the reception hall.  It was a fat kid's dream (my dream) when a cupcake truck shows up with unlimited FREE cupcakes. 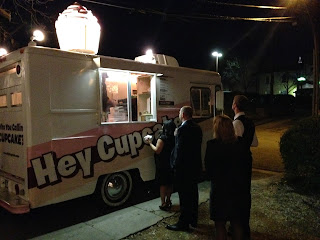