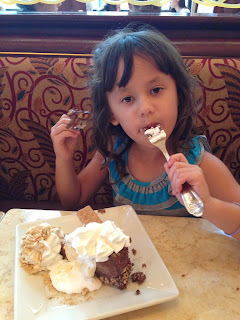 Our oldest niece, Presley, is in kindergarten.  She's 5 and a half years old.  And last week she told her mother a secret.  Her mother told my brother and my brother told me.  (Welcome to the family, Presley.)

When my brother's wife was asking Presley about her school day Presley started to giggle and blush.  My brother's wife did that mom thing where she gets her child to tell her what her child doesn't want to say.  Presley whispered into her mother's ear that while at school the kindergartners were on the playground the same time the third graders were on the playground, and Presley met a very handsome third grade boy.  Presley also told her best friend Charlotte that she thought the boy was very handsome.

How do you stop this?  Why is Presley giggling about boys?  Nothing good can come from this.  I want to quit my job and home school my nieces.