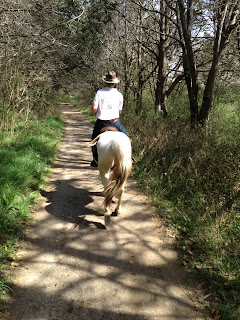 I should have been a cowboy.  No really.  I should have been a cowboy.  The hotel arranged for me to spend the day at a horse ranch outside of Buenos Aires.  The ranch sent Hector a non-English speaking man to pick me up.  He clearly was a local, because he drove in the local style: fast and without noticing the lines in the street, and without the ability to distinguish between red and yellow stop lights.  (My husband, earlier on our trip: They like to center their cars on the lines, don't they?  Yes, they don't drive between the street lines; they mostly drive on them so you can fit two cars per lane instead of one.)

Once outside of the city, the landscape changed.  The countryside is emerging from winter.  The trees have not fully leafed out.  I saw more poverty.  We shared the road with a mule and cart.  And I became a bit nervous when Hector turned from a rural road to a more rural road, which caused his car to rock back and forth as it moved forward.  (I hope I make it.) I relaxed a bit when we passed a vegetable farm, a pack of dogs, a large chicken egg farm, and then I was completely at ease again when we came to the horse ranch with its new construction,  a swimming pool and most importantly horses.

I was greeted by the owner, Adrian, and his associate, Miriam.  They spoke English and seemed happy I had arrived.  (It's always nice to be happily greeted.)  Although, I could see two horses already saddled up, at once they brought me inside to perform the intimate traditional Argentina mate tea ceremony  Adrian was leading the ceremony and he added crushed tea leaves, his secret ingredient (a teaspoon of instant coffee, shh don't tell) and sugar. 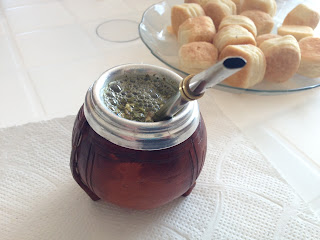 The gourd is passed clockwise, each person drinks it empty, and then passes it back to the leader.  Adrian would add more hot water to the tea leaves and sometimes he'd slip in more sugar before he passed it to the next person in the circle.  Since I was the guest, Adrian told me that the tea ritual would end when I passed the gourd back after drinking it down to the leader and said "thank you."  I let the gourd go around three times before I said thank you.  I wanted to ride the horses!  The tea ritual moved slowly and we had intimate conversations.  I told them about my husband, my life in the states, and my past experiences with horses.  They told me about how they both survived different health issues and they decided that they wanted to do something more rewarding for their job.  Adrian sold his house, sold his wife's car, quit his 20 year corporate job with a pension and went into the horse ranch business.  Separately Miriam resigned from her job with the Holland embassy and started to work for Adrian at the horse farm.

Miriam and I went out riding for almost three hours.  I wanted to get better so she coached me the entire time.  (Keep your back straight, move your hips, squeeze your thighs, don't hold on to the saddle, find the rhythm of your horse...) We rode through part of a 24,000 acre park, which is next to their horse farm.  To prove that riding is all in your hips Miriam had me do drills where I would let go of the reins while in a canter.  The Argentine saddles do not include the horn like western saddles and Miriam had to break me of the habit of always looking to hold onto the saddle.  Miriam said I was a fast learner, and I was a natural on a horse! 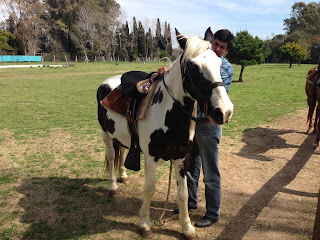 After our hours on the horse they brought me back inside for pastries and water and coffee.  Finally, Adrian drove me back to the city.  We talked about the challenges of living in an economy with high inflation.  He could not save any money unless it was in US dollars.   He had to take his pesos and go pay bills and buy oats and hay for the horses.  He told me that six months ago a bag of oats was 40 pesos and today that same bag of oats is 120 pesos.

The day was fascinating.

If you're in Argentina, then you need to go riding at Caballos a la par.
Posted by P.A. at 8:36 AM