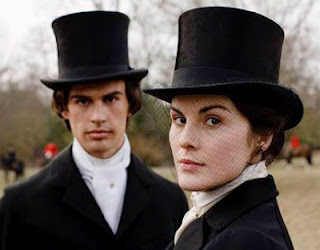 As you know my husband is gone every other weekend in pursuit of his MBA.  And since I cannot go shopping this month, last night after work I went to yoga and after yoga I started watching the highly acclaimed Downton Abbey.  I didn't stop watching until almost 4:00 AM in the morning because it was that good!  Yes, I finished the entire first season in one night.  This show is addicting.  The people of this house are real to me.  The dead Turk storyline is my favorite.  Maggie Smith (Professor McGonagall is now a Dowager Countess!) steals the show.  Last night I was laughing all alone at some parts of this show.  For years I've heard great things about Downton Abbey, it looks like the third season is starting in the winter, and I was not disappointed.

Even though the only gay character at Downton Abbey is a beautiful, unkind, self absorbed ego maniac, which is a gay character stereotype writers use to add an element of drama, I still like this show because that gay character feels true.  If I was alive and living in the repressed society of 1914, then I might be unkind and opportunistic too.
Posted by P.A. at 11:33 AM