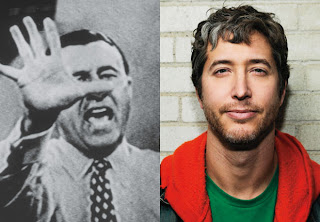 You must read this article in Details, The Amazing Story of the Televangelist and his Gay Grandson, especially if you grew up in and around middle America.


Randy Roberts Potts is traveling around with a performance piece, and his mission is very similar to the mission of this blog:

"The idea is to show the neutral, domestic side of gay couplehood—the 99 percent of quotidian gay life, according to Randy, that's identical to straight life. "It's a visual that people haven't ever really seen in conservative towns," he explains. "A lot of people immediately jump to images of sex or a pride parade. Well, here's another visual. This is what gay couples look like when we're together as a couple in love. There's really nothing to watch, and I want to leave people with that impression. Psychologically, visual images like that go a lot deeper."

************
Who knew that Oral Roberts' grandson and I would have something in common?  Life is so unpredictable.