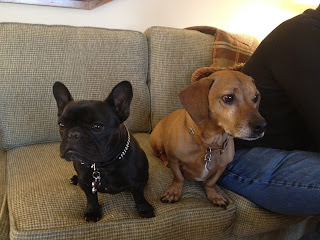 Trigger Monkey and Sarah Dooley stayed with their Susu and Poppy (my parents) while we were skiing in Vail.  Last night we picked them up.  Trigger was beyond thrilled to see his two dads and he was determined to not let us get out of his sight again.  Dooley, on the other hand, was excited to see us but I think she would have been fine if we hadn't loaded her up in the car and brought her back to Dallas.  Dooley loves staying with my parents.  She has more land to explore, and she appears to be in-charge of the household.

Three stories from their week:

While my mother was walking on her treadmill Dooley jumped on and was immediately thrown from the treadmill.  My mother cannot tell this story without laughing.

While Trigger was sleeping on the couch his sister (Dooley) jumped on his head.  This caused a big ruckus between the two of them, and was the only "drama" reported from the week.  My mother defends Trigger's aggression, because he was sound asleep when Dooley jumped on his head.  My mother also defends Dooley's jump, because she wasn't able to see where she was jumping because she's so little.

My mother announced that she is going to have to buy a new couch.  I asked why?  She said because Trigger and Dooley spend all their time sleeping on or digging in her couch and it is destroying it.  (Of course it didn't occur to my mother that she could establish a no dogs on the couch household rule.  Isn't she a good Susu?)
Posted by P.A. at 12:33 AM