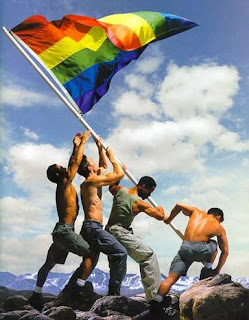 Today's quote-of-the-day is from an Op-Ed in Sunday's New York Times by Frank Bruni titled Genetic or Not, Gay Won’t Go Away:
"We don’t need to be born this way to refute the ludicrous assertion that homosexuality poses some special threat to the stability of the American family. We need only note that heterosexuality — as practiced by the likes of Newt Gingrich and John Edwards, for example — isn’t any lucky charm, and yet no one’s trying to heal the straights...

"I honestly have no idea if I was born this way. My memory doesn’t stretch to the crib.


"But I know that from the moment I felt romantic stirrings, it was Timmy, not Tammy, who could have me walking on air or wallowing in torch songs and tubs of ice cream. These feelings gelled early, and my considerable fear of society’s censure was no match for them.

"I know that being in a same-sex relationship feels as central and natural to me as my loyalty to my father, my pride in my siblings’ accomplishments and my protectiveness of their children — all emotions that I didn’t exit the womb with but will not soon shake.

"And I know that I’m a saner, kinder person this way than trapped in a contrivance or a lie. Surely that’s not just to my advantage but to society’s, too."
Posted by P.A. at 6:37 PM