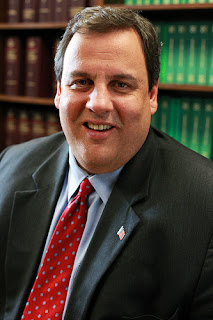 Governor Chris Christie vetoed a bill that would have legalized same sex marriage in New Jersey.

Republicans are on the losing side of history; they need to stop being anti-gay.  Seriously.  Am I the only one that sees this?

This week when the New Jersey state congress passed a bill that would have given ALL of its residents equal rights to marry the person they love, which was subsequently vetoed by Gov. Christie no one whined about an "activist governor."
Posted by P.A. at 11:01 AM