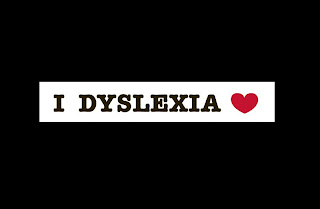 At work, last week, I read something aloud and incorrectly read "Marnie" (as in a woman's name) instead of "Marine" (as in the U.S. Forces).  My team made fun of me because I followed the oopsie with the statement: "That doesn't make sense, why does that say 'Marnie?'"  My team corrected me.

I was first diagnosed with dyslexia when I was in the third grade.  I went to special classes in fourth and fifth grade to learn how to learn with dyslexia.  It was a low point in college when I realized I would never "out grow" dyslexia; I was twenty before I realized I'd never "catch up" and be "normal."

I never, ever tell anyone at work I have dyslexia because I don't want it to be perceived as a weakness, an excuse, a crutch.  But sometimes it gets to me.

Lucky for me, today The New York Times had an article by Annie Murphy Paul titled The Upside of Dyslexia