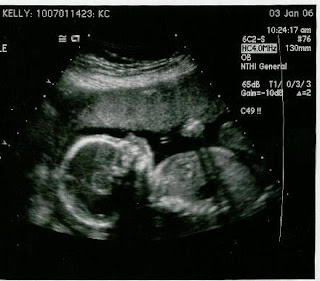 My buddy Jordan and his wife were nice enough to let me tag along to their 23/24 week sonogram appointment today.  I work with Jordan and we met his wife at the doctor's office on the way to lunch.  When we were walking into the building Jordan asked me if people would think we were two gay guys since we were walking into a sonogram appointment together.  I told him that if anyone thinks he's gay, then he should thank them!  We laughed.

This was my first time to see a live sonogram, and it was spectacular.  Their son was constantly moving, stretching and kicking.  I think I saw him yawn.  I could have watched it all day.  The sonogram technician was a man so we had three men and one woman (with child) in the room.  This is typical guy humor: Jordan was proud to show me how big his son's boy parts were!  (His wife roller her eyes, but she was outnumbered and if she's having a son she must learn to deal with guy humor.)  Of course, I played along and asked why his son had three legs.

I have such baby fever right now.  I'm ready for us to get a kid!  However, I just don't feel like my career is where I want it to be- I need to work on my career and then work on a baby!

Jordan and his wife were incredibly kind to share that moment with me today.  Jordan knows I'll never have a pregnant wife, and he also knew I would totally love experiencing the sonogram; he spoke to his wife and asked if I could come before he asked me!  I was so touched by that random act of kindness.
Posted by P.A. at 7:23 PM