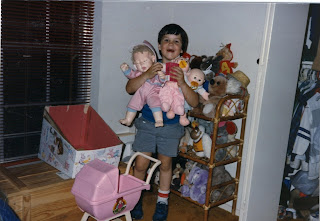 This is a picture of me playing with my dolls as a child.  In my family, it wasn't that big of a deal that I wanted dolls.  I got She-Ra and my brother got He-Man from Santa.  I used to love to spend a week at my cousin's house in the summer, because Sarah had a room full of Barbies.  I eventually stopped playing with dolls because I realized that it made my friends uncomfortable, but that was pressure that I felt from myself; it was nothing that my family mandated.

This CNN story really upset me.  Why do we make life so hard?  If you have a son that likes to play with dolls - don't worry - it'll be okay.

Los Angeles (CNN) -- Kirk Andrew Murphy seemed to have everything to live for.
He put himself through school. He had a successful 8-year career in the Air Force. After the service, he landed a high profile position with an American finance company in India.

A co-worker found him hanging from the fan of his apartment in New Delhi. His family has struggled for years to understand what happened.

"I used to spend so much time thinking, why would he kill himself at the age of 38? It doesn't make any sense to me," said Kirk's sister, Maris Murphy. "What I now think is I don't know how he made it that long."