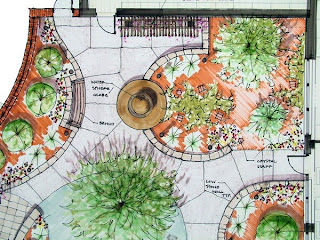 Regrettably, I've learned that "sticker shock" is a real medical condition. This week in our dinning room I went into stick shock after meeting with the landscape architect.

Two years ago in July we bought a 1980 house on a normal 80x125 city lot. Six months after we bought the house we started seeing some cracks in the walls. We had many different foundation repairmen look at our house and bid on the repair work. The bids were so inconsistent ranging from $1,500 to $9,000 that we decided to hire a structural engineer. The engineer said we lived on Texas clay, and we needed to learn to live with a few small cracks. He said he wouldn't repair the cracks, but he would add french drains in the front of our house.

So we had two different companies bid on installing french drains. Both the independent bids came in at around $2,000. However, one guy said we needed a master landscape plan since he'd have to rip out our bushes to install the french drains. We hired a landscape architect to draw up a master plan. On Monday he came to the house to show us the plan and to give us the bid to implement his plan. The landscaper, my husband, and I were in the dinning room looking at his plans. As the landscaper started talking about french drains, boulders, and trees, I began to think this is going to be really expensive. To me really expensive would be $5,000 and really, really expensive would be $10,000. After all, our front yard isn't that big and we were talking about dirt and rocks and plants.

After the landscaper finished walking us through the plans he gave us the bid...

...he said it would cost us $28,800.44 to implement his plan and he needed a 50% deposit. We were in the dinning room when he told us this, and I honestly did not know what to say or do next. I just asked if it came with a new car, and then I stumbled over a few words and I tried not to look at my husband because I was worried I bust into laughter. Do we look like millionaires? Do we look like fools? Did he want us to take a second mortgage to pay for the landscaping? What the hell was he thinking? Who spends $29K on dirt and rocks and plants?

My husband and I cannot stop laughing about the situation.
Posted by P.A. at 6:55 AM