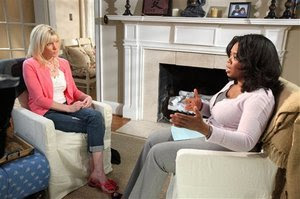 Did you watch Oprah's interview with John Edwards' mistress? First, I can hear Truvy's voice in my head: "You know, I'd rather walk on my lips than criticize anybody..." however Rielle Hunter is the type of person that annoys me to a very great extent.

She is an adult that takes absolutely no responsibility for the way her actions affect other people. She thinks because "she was following her heart" she can do anything she wants in life? She claimed that she did not break up John and Elizabeth's marriage, but she was dating and sleeping with a married man...even after she knew Elizabeth thought the affair was over. Next, she openly claimed that she didn't use birth control on Oprah and (surprise, surprise) she ended up pregnant with a married man's baby. Was that love child an accident? What really sent me over the edge during the hour-long interview was when she admitted to Oprah that their was a sex tape, but she thought she destroyed it by cutting the tape. Wait, what? She's foolish for thinking we're thinking she's the victim of a sex tape scandal. How does an adult (of any intelligence) not know how to destroy a tape?! Not only did she not destroy it- she left the "destroyed" tape in a box in her friend's house. So did she want the tape destroyed or did she want the tape found?! And her justification for all this stuff was that she was just following her heart...

I just cannot tolerate adults that go through life without the ability to understand cause and effect. It's not the fact that she had an affair with a married man that bothers me; it's her inability to claim the pain she caused others because of the affair. Oprah asked her if she thought she hurt Elizabeth Edwards, and she just said we'd have to ask Elizabeth. She would not admit to causing pain to Elizabeth Edwards, however, she also admitted to buying John Edwards a cell phone so they could hide their calls, which implies she knew the relationship would harm other people. It's almost like she's living in a fantasy land where she is only good and she can do no harm...

My husband makes fun of me for caring so much about people I do not know. He'll make fun of this blog post, for sure. Okay. Whew. End-of-rant. The takeaway is no matter what you do in life at least you can take full ownership for your choices. Own it. Own your choices, because the choices you make dictate the life you lead.
Posted by P.A. at 7:21 AM