Perry is not an elightened individual 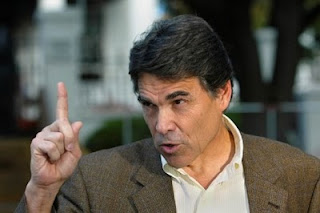 When was the last time your state's governor insulted you? My state's governor does it all the time. Governor Rick Perry is once again proving he knows how to pander to the lowest common denominator, and he does it because it works for him since he was just elected to unprecedented third term as Texas' governor. Sigh.

It pisses me off enormously when he says things like this. My husband and I are Texans. This is our state. We pay Texas sales tax, almost daily! Next month we will pay our annual Texas property tax bill, which is over $10,000! Perry is the governor of our state, and he's throwing out quotes like this implying that high on his Christmas wish list is for all the gay people in committed relationships to pack their bags and move to California. It's like we're not welcome in our own state- according to Perry who is the chief executive of our state?!

Is it okay to publicly degrade gays?