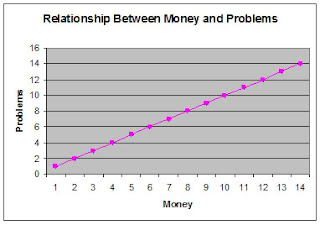 This weekend I read this article in the New York Times about a family that inherited minority shares in an outdoor advertising company, which was sold in 1998 for around $600 million. The family was wired $14 million in 1998, which was around $10 million after taxes.

They had $10 million in cash after taxes in 1998 and today in 2010 they are bankrupt. I read this article this weekend, and I've been thinking about the family all week. The article is titled:
Family’s Fall From Affluence Is Swift and Hard, which is even a more unbelievable statement when you realize their fall from affluence was the result of their over spending.

I'm not judging this family; I think it must be a terrible situation to fall from wealth, and I hope they'll find peace. I've been thinking about this family because this situation fascinates me. I like to run the scenario in my head: if we received $10 million free and clear today where would we be 12 years later? Would we be broke too? I think not. I know we wouldn't, but I'm sure this family thought the same thing in 1998...