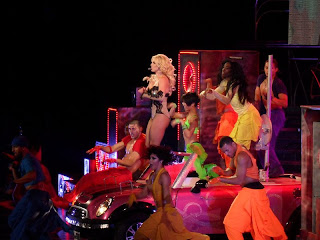 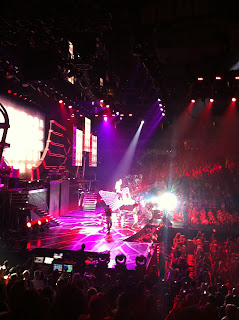 My husband, my buddy Jordan, Jordan's pregnant wife, and I had so much fun last night at Britney Spear's concert in Dallas.  She knows how to deliver a big show.  The entire 90-minute show was fantastic, but her encore was the most amazing thing ever.

Her encore started with her on the floor singing "'Till the World Ends" and at one point Nicki Minaj appeared on stage and started singing too.  After a bit Nicki walked off stage and then Britney ended up flying across the arena with big white angel wings.  She flew over our heads while fireworks were shooting across her stage, while confetti was shooting out into the crowd, while a laser show was beaming across the arena, while a film of a hydrogen bomb exploding played on the big screen, and all of this happened while her fans were "dancing until the world ends" in unison.   It was the most stimulating experience I've ever had at a concert.  Like I said, Britney knows how to deliver a big show.
Posted by P.A. at 9:05 PM