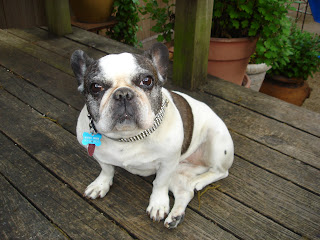 It's been six months since Martha Fauker died.  I still miss her, but the sting of her death has faded.

No matter what we did to persuade her otherwise, she always peed in the same spot in the backyard, which killed the grass.  This spring new grass is growing in that spot, and without Martha Fauker I suspect our yard will be lush and green by June. I will miss the brown spot in my yard.

My three-year-old niece, Presley, likes to count the boys and girls that live in each house.  She includes dogs, appropriately, in her computations.  She starts at my parents house and she lists three girls (Susu and their two dogs) and then she lists the one boy (Poppy).  Next she counts by naming the four girls at her house (herself, my brother's wife, my niece Paxten, and their dog) and then she counts the one boy (my brother) at her house.  Finally, she counts the two boys (my husband and me) and the girls, which are our dogs (Presley always counts Trigger as a girl even though Trigger is a boy) that live at our house.  For the first time a few weeks ago Presley did not include Martha Fauker in her counting of the girls that live at our house.  I don't know why, but it made me really sad.  I felt silly for feeling sad.