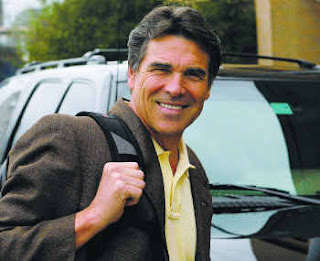 Two weeks ago we hosted a couples shower for our friends, and I didn't know any of the groom's friends before our shower.  Late into the party the best man was in our kitchen talking to me while I was washing dishes at the sink.  It was obvious that the best man was having a blast; he had (clearly) enjoyed our open bar; he kept talking about how great the food was and he also kept telling his skinny girlfriend to try the ooey gooey butter bars.  It was also obvious to me that the best man, who I like, had never really hung out with gay guys.  He was trying to over compensate for his lack of having any gay friends by dropping hints into our conversation about how he believes in equal rights for gays, he thinks it's dumb we can't get married, etc.

At one point we start talking politics and during that conversation these are the words that came out of the best man's mouth:  "I'm Republican, but I hate Rick Perry. I didn't vote for him. He's so gay."

My head immediately bolted up from looking at the dishes I was washing in the sink, but before I could turn around to look at him his mouth was already spewing  apologies.  "I'm so sorry.  I didn't mean that...."  He left the kitchen after his tenth apology, and later I learned he went and told the bride what he just said and apologized to her too.

When will straight boys learn?  Being gay is a blessing, which means the word "gay" is a positive word and it cannot be used to belittle another individual.
Posted by P.A. at 9:24 PM