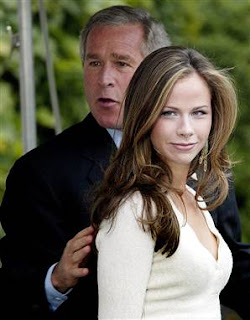 From The Daily Beast:

Bold move, Barbara Bush. The daughter of former President George W. Bush released a YouTube video Monday coming out in support of gay marriage. Her statement is a complete departure from her father, who, as president, pushed for a constitutional amendment banning gay marriage. Bush, 29, declares in the video, “I am Barbara Bush and I am a New Yorker for marriage equality.” She joins other children of conservative politicians, such as Meghan McCain and Liz Cheney, an out lesbian, who broke with their fathers to support gay marriage. As for Bush, a Manhattan resident, a friend said she has many openly gay friends and was “loved by the gay community at Yale.”

Thank you Barbara! I love the wisdom of youth! It appears that gay marriage is a generational issue; the older you are the less likely you are to support gay marriage. The good news is that we're 30-years-old and if we live long enough, then my husband and I will be allowed to get married in Texas...I hope.
Posted by P.A. at 6:34 AM