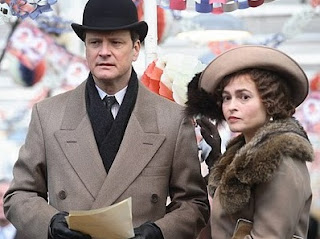 I, for the first time, saw The King's Speech last night with my parents; it was their second time to watch the film. Now I know why they were willing to watch it again- it's such an inspiring story.

This film supports the "everyone's pain is the same" theory on life.  You can be a gay man living your life in this century or a king to one quarter of the world's population living last century and you still have your own life's struggles to overcome.  I think the key to life is thriving through the ups and downs.  We all have ups and downs- even kings.
Posted by P.A. at 8:30 PM