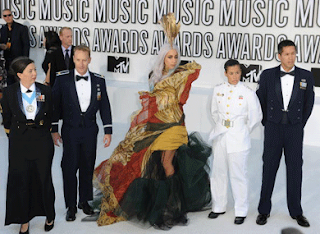 Did you watch MTV's VMA? Lady Gaga walked the "white" carpet with brave military members that were discharged under Don't Ask Don't Tell. Thank you Lady Gaga for using your spotlight to shine a light on the injustices in the world. It is my wish that one day (in my lifetime) gays will have equal rights in the U.S.A. We're getting closer and closer to that reality each day!

Nominated for 13 Music Video Awards, Lady Gaga has decided to make a statement in support of gay rights at MTV's Sunday evening show.

Her chaperones? A group of service members affected by "don't ask, don't tell," sources have confirmed to The Advocate.

UPDATE: The four service members on the white carpet with Lady Gaga were identified as Katie Miller, described on Servicemembers Legal Defense Network's website as "a top West Point cadet who resigned in August to protest the discriminatory law"; Maj. Mike Almy, an Air Force officer who was discharged in 2006 and who testified in the federal challenge to "don't ask, don't tell"; David Hall, a former U.S. Air Force Staff Sargeant; and Stacy Vasquez, Army Sergeant, First Class, who was also discharged as a result of DADT.

Lady Gaga’s decision to attend the VMAs at Nokia Theater in Los Angeles with gay service members in tow isn’t the first time she’s taken a stand in support of repealing DADT. Prior to her concert in Washington, D.C. last week, the subversive siren met with clients of SLDN, an advocacy group that works with soldiers facing discharge from the military as a result of the 1993 law. Gaga was also a high-profile speaker at last year’s National Equality March in Washington.

Though a federal judge in California last week ruled that DADT violates the First Amendment and due process rights of gay soldiers, pressure for the U.S. Senate to repeal the law remains immense as lawmakers return from recess on Monday.