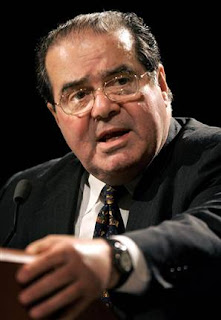 The U.S. Constitution does not outlaw sex discrimination or discrimination based on sexual orientation, Supreme Court Justice Antonin Scalia told a law school audience in San Francisco on Friday.

Didn't our Founding Fathers first draft a Declaration of Independence which clearly stated "We hold these truths to be self-evident, that all men are created equal, that they are endowed by their Creator with certain unalienable Rights, that among these are Life, Liberty and the pursuit of Happiness"? What about the ninth amendment in the U.S. Constitution that declares that the listing of individual rights in the Constitution and Bill of Rights is not meant to be comprehensive; and that the other rights not specifically mentioned are retained by the people?

I am not a fan of Justice Scalia especially since he compared gay sex to incest, prostitution, and bestiality. (Seriously, go read his dissenting opinion of Lawrence vs. Texas.) The good news is that I'm 30-years-old and he's 74-years-old, which means he'll dead and gone way before I'll be dead and gone...and hopefully the next justice will be less arrogant and self-righteous....
Posted by P.A. at 10:28 AM