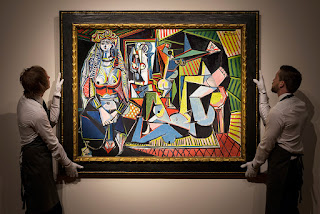 I'm working with a team that is very sports focused, SPORTS!, and as a result I've picked up a lot of knowledge about Sepp Blatter and the corrupt FIFA organization.

First, FIFA's only power comes from owning the World Cup.  It's not like the FIFA professionals are kicking soccer balls and making goals, right? They have over a billion dollars in cash because they can organize a sports event every four years?  Why not just create another tournament hosted by non corrupt individuals?  What really gets me hot is when a group of elite paper pushers (with no real unique talent) have a disproportionate amount of power and influence and use their power to enrich themselves.  The soccer players should have more power and cash since they are the ones on the field.

Second, I consider myself an honorable individual, and I despise Russia's Vladimir Putin (he's illegally occupying Georgia); however a painting, believed to be a Picasso, was allegedly gifted to Union of European Football Associations (UEFA) president and FIFA executive member Michel Platini in return for his support for the eventually successful Russian bid for the 2018 global showpiece.  While I consider myself an honorable individual and I hate Putin I would do whatever Putin wanted if he gave me a Picasso!  A Picasso!!!  Why hasn't anyone ever tried to bribe me with a Picasso?  I want a Picasso.  A PICASSO!!
Posted by P.A. at 7:40 AM