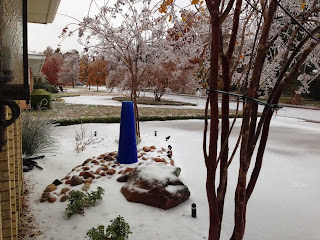 It's cold y'all.  Burr.  The past few days were glorious (always) but a little crazy.

First, I fell in and then out of love with American Airlines. My client sent me to rural Georgia so I could get a few branches back on track- they were off the rails.  On the American Airlines flight out to Atlanta I flew on a brand new airplane.  Who knew American was still purchasing new planes?  It still had the "new car" smell, and they served the most delightful little breakfast in flight.  I had to snap a photo it was so charming. 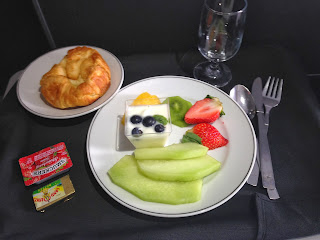 The only thing I didn't like is this guy was on my television watching me eat my delightful little breakfast: 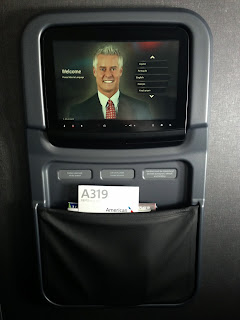 Then towards the end of the week the ice storm hit Dallas and paralyzed American Airlines from managing the craziness.  It seems like American Airlines should expect to have ice storms, and they should know how to operate through the challenge.  However, it was a brand new day in American's world- so it seemed.  They cancelled my direct flight, and they were going to send me to three different airports and put me on three different planes to get me back to Dallas.  That sounded like a trap.  I stayed on hold with American for over an hour one night, and the next morning I was on hold with American for 1.5 hours before they hung up on me.  American canceled my reschedule route back to DFW.  This was Saturday morning, and I was frustrated, therefore  I planned to drive my rental to Dallas.  Atlanta to Dallas is 12 hours on the road.  I could do that?!  What I couldn't do was take orders from American Airlines- they didn't know what they were doing.

Luckily my husband knows how to manage me- he ordered me to drive to the Atlanta airport (instead of Dallas) and get on the Southwest Airline flight he had just booked for me.  Genius.  While American was operating like a duck in a hail storm Southwest was operating like a machine.   It was business-as-usual at Southwest and within a few hours I was home in Dallas!

Southwest is never going to serve me a delightful little breakfast in flight.  They don't waste time on fluff.  They focus on the fundamental goal: flying planes.  Southwest knows how to fly planes.