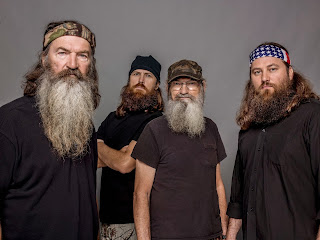 I had a crazy week at work, I had a bit of an illness, I was without an internet connection at home for a few days, and I we just had a busy weekend...but you don't want to read my excuses.  I have neglected this part of my life, but that all changes with this post!

Did you all read/watch about the Duck Dynasty drama last week?

In an interview in the January issue of GQ, Phil Robertson says homosexuality is a sin and puts it in the same category as bestiality and promiscuity.

"It seems like, to me, a vagina -- as a man -- would be more desirable than a man's anus. That's just me. I'm just thinking: There's more there! She's got more to offer. I mean, come on, dudes! You know what I'm saying? But hey, sin: It's not logical, my man. It's just not logical," he's quoted as saying.

He also made comments regarding race and growing up in Louisiana before the civil rights era.

"I never, with my eyes, saw the mistreatment of any black person. Not once. Where we lived was all farmers. The blacks worked for the farmers. I hoed cotton with them. I'm with the blacks, because we're white trash. We're going across the field. ... They're singing and happy. I never heard one of them, one black person, say, 'I tell you what: These doggone white people' -- not a word!

"Pre-entitlement, pre-welfare, you say: Were they happy? They were godly; they were happy; no one was singing the blues," GQ quotes Robertson as saying.

Duck Dynasty is on my DVR.  I'm a fan of the show.  And I was disappointed to learn about Phil's comments on homos, but I've been a homo my whole life and I'm used to people saying crazy things about guys like me.  I don't agree with him.  I don't hold it against him- a man is free to speak his thoughts.  I'm a little less excited to watch his show now.  Perhaps, me and a few homosexuals need to spend a week with Phil and the rest of the Duck stars?  It would show the world that while Phil and I will not share religious beliefs- we could at least share a meal and gain a better understanding of each other?

It would be impossible for Phil to convince me to literally interpret a book that was written (by men) thousands of years ago.  Just as it would be impossible for me to convince Phil that a literal interpretation of the Bible removes the focus of the most important parts.   After all, men do not have to agree on religion in order to be friends.  Focus on what's important.