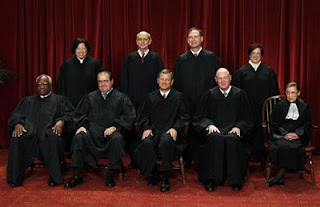 According to Towleroad, this is the last week of the 2012-2013 term of SCOTUS.  I'm waiting and hoping that these nine strangers will give me equal rights.  It's odd.  When was the last time nine strangers could make a decision that would significantly change your life?

I like to remain hopeful, which is why I want to end this post with a quote from my dear friend Anni.