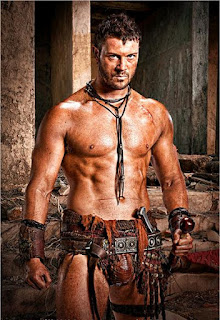 Best. Day. Ever. It pleases me to a very great extent to have recently learned that television has its first gay action heroes!  I shall be streaming Spartacus War of the Damned to catch up on the love affair between Agron and Nasir.

Q: What was your reaction when you found out you’d be playing a gay gladiator?

A: It didn’t make any difference to me. I would have played him the exact same way whether he was interested in women or men. His personality wouldn’t change. They just wanted me to make him really fierce and a hardass, but then open up and have a soft, sensual side when he’s alone with the people he loves. His sexuality doesn’t change that as far as I’m aware.
Read the whole interview here.
Posted by P.A. at 6:00 AM