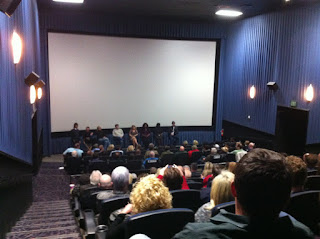 Go see the independent film, Blues for Willadean, which was written and directed by our friend Del Shores.  It's playing at the Angelica in Dallas this week only.  We watched the film with Del and it was very well received by the audience; plus they had a Q&A session with some of the cast after the show.  You feel for his characters, and especially Willadean's isolated existence.  This film has been called a Texas tragedy, but it also offers hope...it's never too late to change your life.

Here's what the internets said about the film:

"This movie explores the hidden emotions, shame, and secrecy of battered women, while also offering hope, healing and truth. A delicate blend of frightened humor and pain, it delves right into the heart of abuse from all sides: the abuser, the abused, and the powerless bystander. It is the story of Willadean Winkler, the wife of a blue collar truck driver, as she attempts to escape the abusive prison he has built for her. With the help of her only friend, LaSonia, who lives in the trailer next door and the musical encouragement of the specter of a mystical Blues Singer, Willadean fights to break the cycle of the sick dance between the abuser and the abused."
Posted by P.A. at 6:00 AM