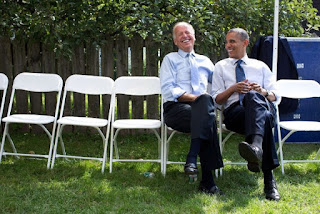 Hip, hip, hooray!  Four more years!  I am thrilled that President Barack Obama was elected to four more years.  I cannot say the same for my clients in western Oklahoma.  My Tuesday was difficult as the only pro-Obama man in the office.  Apparently all the Republicans thought  Romney had the momentum on Tuesday.  They expected to win the popular vote and they thought they would also win the White House.  They did neither.  Romney lost all but one swing state, and he lost the popular vote too.  On Wednesday my client's Controller was wearing all black as a sign of mourning. The entire office was stunned.  They really believe that Obama is captaining the ship of ruination.  They also don't understand how the rest of the country doesn't agree with them that Obama is evil.  So misguided.

I was mostly quiet on Wednesday, but I did have a big smile on my face.  I felt something similar when anti-gay, pro-war Bush was reelected to a second term in 2004.  It's tough.

Of course I'm still smiling.  I'll be smiling for the next four years too!