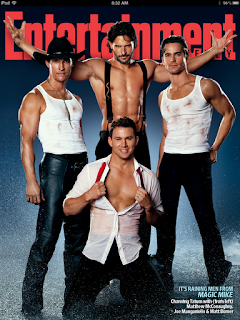 What's one (of the many) good things about being gay?  You can do gay things!  Haaaay!  Yesterday my mother and I had a dinner and moving outing.  Unlike her straight son, I wanted to see Magic Mike!   This film is getting really good reviews, and so my expectations were a little too high.  I liked the film, but it was very predictable.  (Guess what? Strippers have drug and alcohol problems?) I also was disappointed that Joe Manganiello (from True Blood) didn't have a bigger role in this film. Nonetheless, the price of admission alone is worth seeing Channing Tatum get out of bed nude and walk to the bathroom!  He has incredible legs.  Also, it's a little bit unbelievable that a male strip club wouldn't be over run with gay men, right?  This film had zero gay guys.

Magic Mike is a fun, sexy summer film.  Channing Tatum can act and dance.  I liked him in this film a lot.  Matthew McConaughey was the best in his role as a seedy, self-absorbed club owner.  Both my mother and I laughed out loud when he was playing the bongo drums in the nude!  (That's an Austin, Texas inside joke if you didn't get it.)

My mother and I couldn't decide who enjoyed the film more: a 56 year-old grandmother or a 31 year old gay man.  The audience was full of women of all ages and just a few men. The important thing is that my mother and I had fun together!   Mom, you can pick the next movie we see together.
Posted by P.A. at 2:09 PM